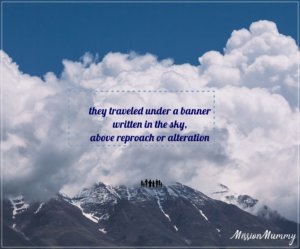 “And the cloud of the Lord was over them by day, whenever they set out from the camp”

“Under a cloud” first conjures images of being in poor standing for me, having wandered from outspokenness to offense, in need of seek forgiveness. It’s isolating under there, cut off from those around you with a barrier you can no more reach than remove. ‘Under the cloud of protection’ is quite the opposite, a place of uplifting security and safety, segregated from the glorious sunlight, but protected from the harsh scalding of it’s power.

As I’ve wandered in Numbers 10 this month I’ve been drawn back and back to this dichotomy. These people are not simply the chosen of God, but the set apart nation, and, as their pale skin and travelling garb would have shown, they did not belong to the land into which they would pass. They traveled under the cloud of their ancestors mistakes, the disbelief that had given them a 40 year journey in the wilderness. I wonder if they even remembered the way that brooks can babble or the roar of that vast Nile rushing. Yet they traveled under a banner written in the sky, above reproach or alteration, a banner of purpose and protection, a divine decree announcing their arrival.

This was a wiser nation perhaps, a nation that had received it’s guidelines, that knew it’s limits, that understood more about what it honored and represented than those that had built the golden bull. There is a purpose and a energy in the air as the people who have watched the generation of doubters dwindle, with tales of great plagues and divided seas, await their turn to be the heroes in the drama. And now they move in the half light forward.

It’s a picture of faith that resonated much more with me than the glory of the Jericho or the drama of the red sea. A swathe of faces under a vast cloud, their weapons and trumpets muted in the gloom. This slow wander forward, with cattle and crying babe, the stumbling elder and over zealous teen, the carts of tent cloth, the paraphernalia of a nation. It’s an inclusive and yet dynamic image of God’s whole family.

This shrouded concourse is the representation of the unfailing faithfulness of God and his people. These who wander with neither sun nor stars to guide their way. These who trust what they can neither hold nor define. These who journey onward together with all they know. These whose hearts beats with long whispered promises. These people of the one true God. What a template for moving forward.