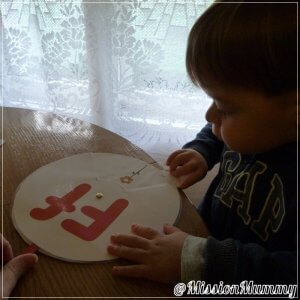 This week’s tot-school…
…was over in a flash!

This week I’m going to start by admitting my recording chart was rather neglected so the write-up is in large parts a guess based on vague memory and photo evidence. The activities were really varied this week and we deliberately shed away from repeating some of last weeks activities. Fish and frogs were a wonderful theme to work with and we found ourselves revisiting activities throughout the week a lot.

Six weeks in and we’ve noticed a few big changes in the way Adam responds. Firstly he’s much more interested in his wipe clean books and his pen control is obviously improving. His favourite activity is to scribble over a named object or area (eg, feet, eyes etc). His concentration time is still good though he now realises that if requested it, there will be other activities coming so if he’s had enough he states clearly! His placement skills are great and there is real concentration to make sure even the smallest button is central to the circle. These is a visible reduction in time taken modelling an activity to him too. He’s now counting, though he often misses 3,4 and 5 on his way to 10, and his shapes, and colours are improving rapidly.

Fishing and buttons came out top this week. We played fishing for ages, catching big, medium and large fish, then even huge letter fish too! We grabbed the buttons as an after thought and soon needed to find out our extension do a dot pages because he adored them – after a week absence they were the favourite requested activity.

The paint dabbers definitely didn’t interest him this week, while paint had topped white board markers so far the balance firmly swung round and 3 or 4 dabs was the most one sheet saw before he rejected it.

Tot-school is optional, sometimes I try and entice him to the table and he refuses, so I quit and try again later. Other times we move activities to the floor, sometimes we do totschool before bath in the evening, other times we pull out yesterdays activities in the morning before nap. Occasionally we skip altogether, like last week on Tuesday, totschool is just structured play, and play should never be a chore! 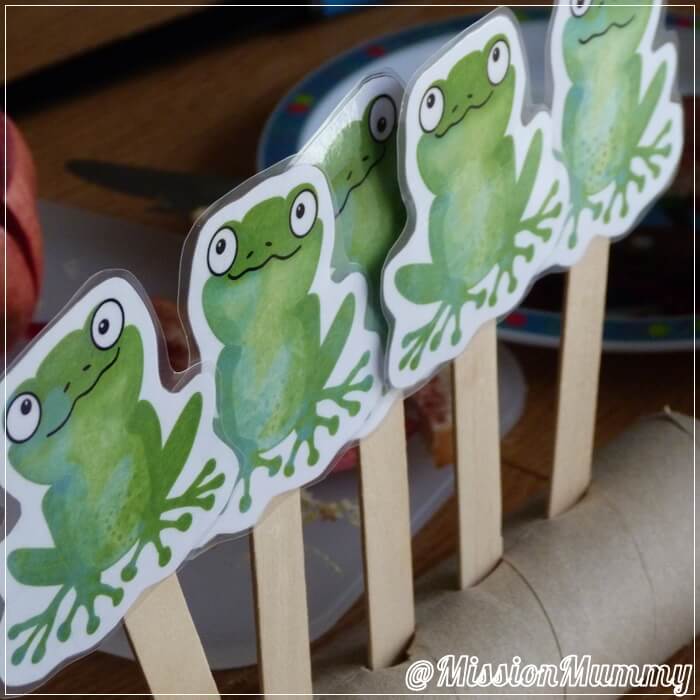 Monday
The letter tracing mats complete with picture are becoming my go to resource to start the week, this one held images of a frog, a fish and a flower. Rather than start with the pens we tried the 5 speckled frog song with the printout from Picklebums (LINK to resource) and after a couple of rounds of the song, complete with Adam helpfully splashing the frogs into the water we brought out the pens and decorated our ‘F’ pages. We also have a new eraser that’s proving a big hit. 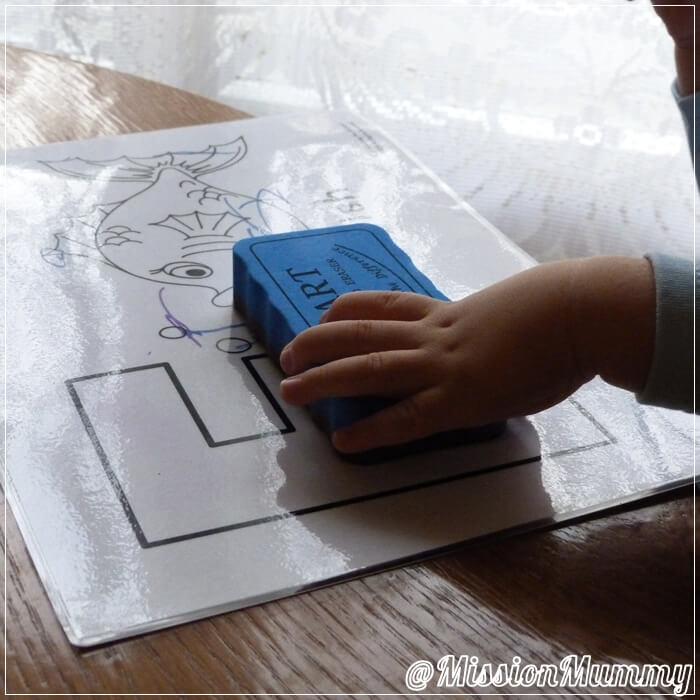 Tuesday
Today we fished,I cut and laminated the sorting fish activity from ‘3 Dinosaurs’ then taped split pins to the back, couldn’t find paperclips, but they worked really well as they didn’t obscure the image. The rod was a plastic pole from a balloon or similar and the string was attached to a picture hook bent round a small magnet. We also looked at the bigger ‘Super Simple’ lowercase fish with letters (LINK to resource) briefly and planned on repeating the frog song but he wasn’t really interested in anything other than fishing.
1) Fishing activity.
2) Lowercase letter fish
3) 5 speckled frog activity 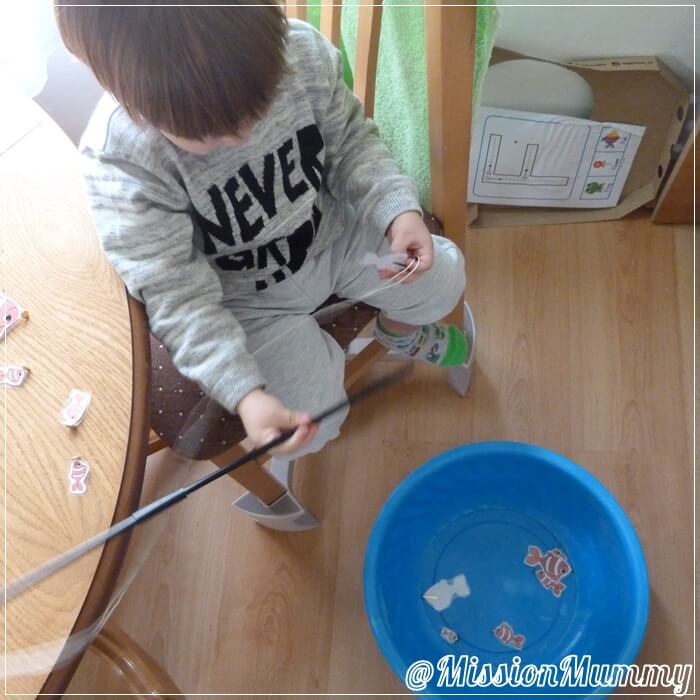 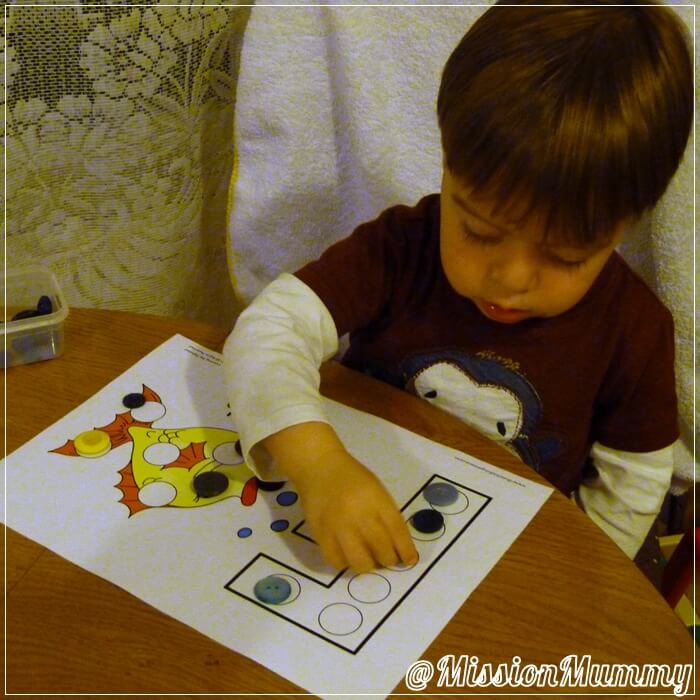 Wednesday
First the spinner craft, this was two circles, one laminated and one backed onto card. Adam was given a sheet of images that started with ‘F’ and we added the pictures of the things he could name. It was supposed to be a paint dabbers day but Adam was just not interested, I tried again with a different sheet but with no improvement. However he did go for number sorting and with the do a dot sheets out already we tried buttons… he was still there half an hour later doing the extra farm animal sheets!
1) letter spinner
2) Do a dot sheets – find unbound letters + letter with image
3) button placement
4) number sorting – 1 to 3

Thursday
We repeated the nine square puzzle idea (divided into 3) then onto ‘Goldfish alphabet tracing cards’ from totschooling (LINK to resource) and, between eating, we managed to make at least the letter F. We also revisited the letter F spinner before playing with buttons again! Later in the day we managed to squeeze in an introduction to scissors and another round with the fishing game.
1) nine square puzzle
2) Goldfish alphabet tracing cards
3) letter spinner
4) Buttons
5) scissors
6) fishing game 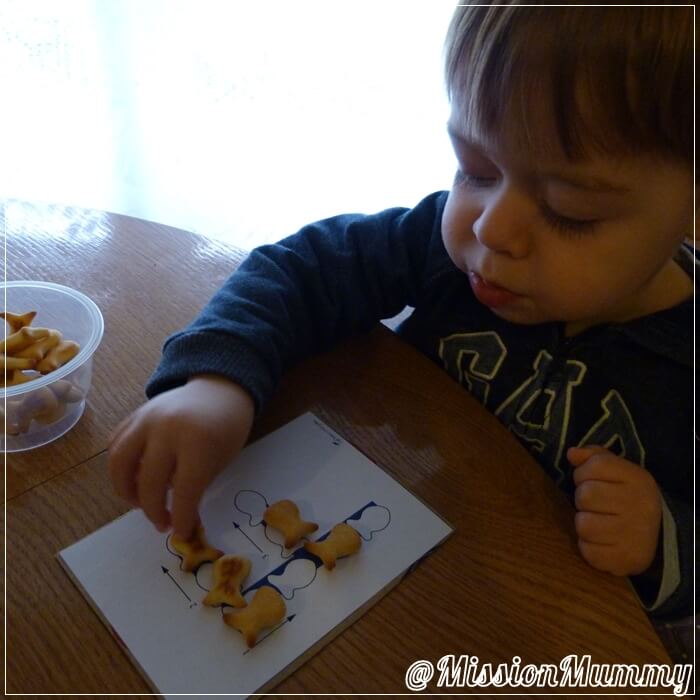 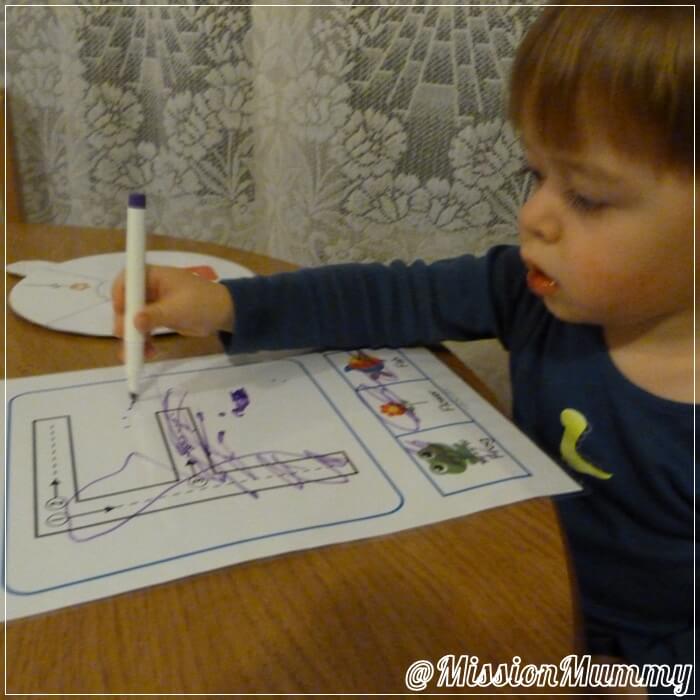 Friday
I’d hoped to do a letter craft on Friday and some letter sorting with the foam and felt letters but instead we just enjoyed our last day with so many of the activities that we’d loved this week. From singing with speckled frogs, dangling magnetic fishing bait, spinning the letter F objects, pulling out the box of buttons to using the pens to trace the letter it was great fun. Using established activities on Friday is a trend I hope we continue because once they get filed it’s goodbye for the next six months at least.

Next week: the letter G will be reaching high with giraffes!