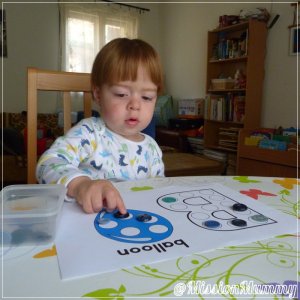 This week’s totschool…
…was about getting hands on!

I’d really debated the order of letters before we started this week. Teaching alphabetically is often discouraged but this first time round I’m just exposing a child to letters he’s never recognised before. Deciding the order doesn’t matter we’ve plumped for alphabetical as he’ll find that in his picture books.

It was a mixed bag of success and it was lovely to introduce some new activities to him as he gets the gist of what our totschool time is about. Less pens and more items to roll in his fingers tied in well with the balloons, balls and butterflies that featured heavily throughout the week. While we didn’t fully manage to grasp what the lower case ‘b’ was we did really improve our vocabulary with colours this week.

I wanted something that let me work at me introduce simple educational concepts such as shapes, patterns, letters and vocabulary in English without trying to turn my toddler into an early reader. I firmly believe exposure is helpful but there is evidence that being able to recite your alphabet before you can request to go to the toilet rarely helps in the long term.

Control skill is my clumsy way of saying the ability we are trying to focus and improve on, sometimes that’s liguistic, other times it’s physical or visual or just an awearness.

Totschool mostly happens at the big table and sitting at a table focusing on an activity is a great skill, as is following instructions, fine motor development, exploring different materials and building vocabulary – Tot school is a form of play, options for activities are placed before Adam he can choose if he wants to use them and how to do so and for how long. We use weekly themes to add variety and expose him to letters.

Before totschool, 2 or 3 times a week, we would get out the ‘teach my toddler’ blue box. It was flashcard based and while the numbers and colours packets were firm favourites, overall it didn’t suit us very well. Adam particularly enjoys matching the flashcard to the poster so we are hoping to use it for reviewing. (For other mummies reference Adam is 23 months old) 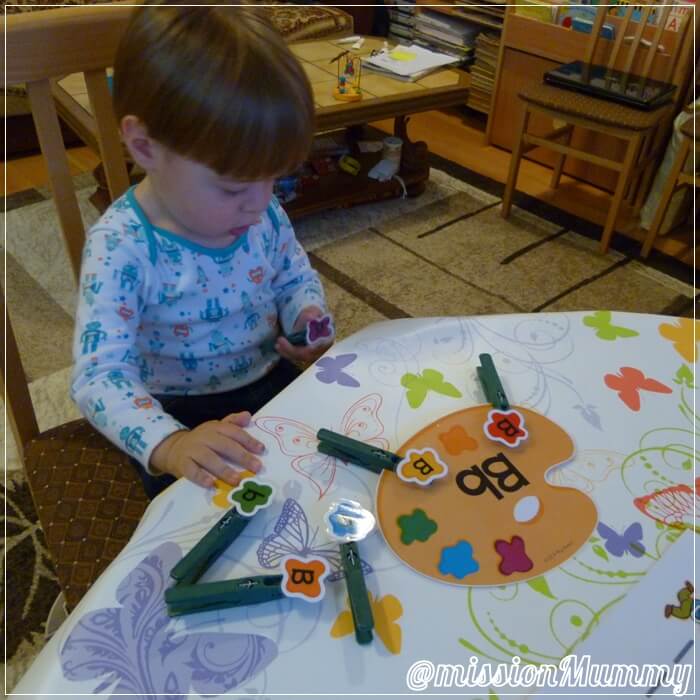 Tuesday (control skill : placement)
We started with buttons quickly identifying confusion over the small case ‘b’ and ‘a’. We moved on to a capital ‘B’ threading card and Adam surprised us by how well he did with this with very little instruction. Back to the do-a-dot sheets for more placement practice, this time with the paints. We used both the blank letters with image and a picture image where a ‘b’ is placed in each circle, Adam was very good at “finding the b’s” with his paint and very proud of his achievements. The session ended with Daddy and Adam both stamping away with paint splodges everywhere!
d) Dot painting – LC + UC plus image + find the letter image
e) Button placement – – UC plus image
f) Threading card 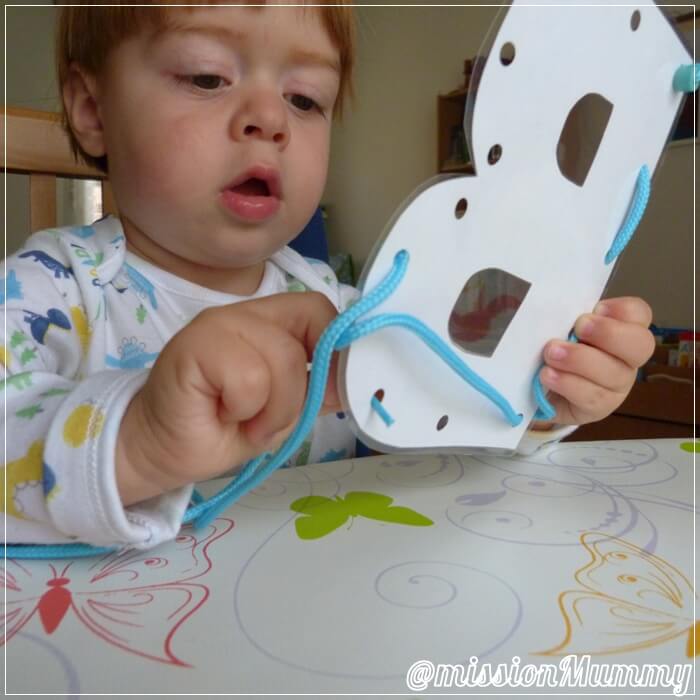 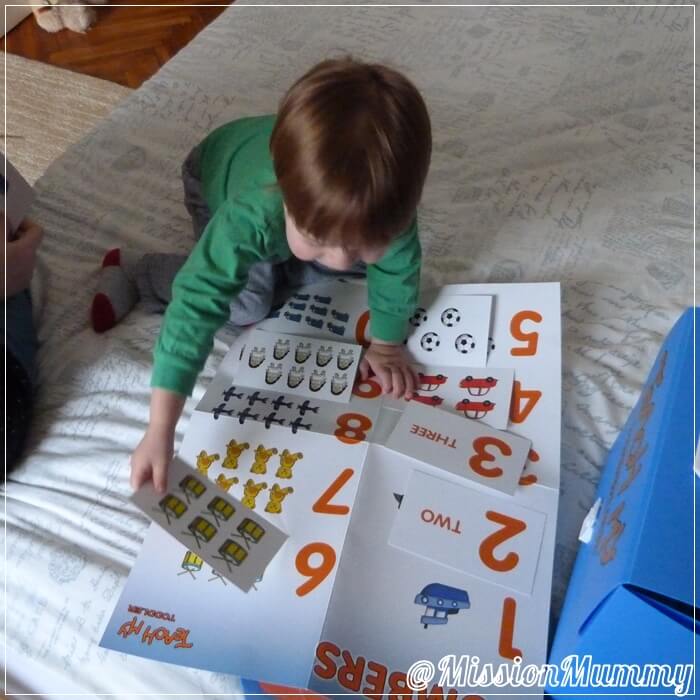 Wednesday (control skill : counting)
Wednesday we skipped a day. Rather than do full tot school after nap we chose to go out leaving us with just a few minutes to review numbers with the blue box. After one round of the flashcards Adam happily matched either the numbers or the pictures using the cards and poster, then played with the soft jigsaw until we put his shoes on to leave. He’s got a good grasp of what counting is, he knows to pluralise, and loves the number 2 though he doesn’t really equate any other numbers and only recognises 2 and sometimes 5 by sight.

Thursday (control skill : sound recognition)
Thursday was again back to the letter ‘b’ at the table with our 2 piece puzzles – linking words with the beginning sound – I’d backed them onto cardboard this week and so they were much more successful. We then played with the butterflies and a butterfly do-a-dot sheet saying the letter ‘b’ each time a butterfly was landed in a circle. To extend this concept painters tape was used to draw a big ‘b’ on the carpet which we proceeded to fill with anything begging with that sound, definitely the most fun activity of the day.
g) 2 piece puzzles for the letter sound
h) Butterfly beads placement on butterfly do-a-dot
i) Painters tape floor letter fill 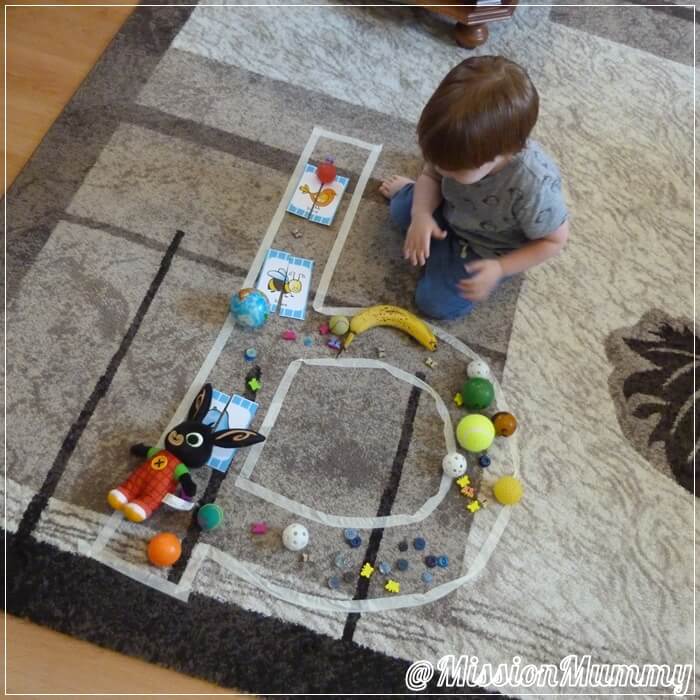 Friday (control skill : sequencing)
Friday came and we are still confusing the small case ‘b’ with the letter ‘a’. Introducing the 3d letters helped a little but it seems like this will be a week of exposure over retention. For review we revisited the basic letter and balloon pages, the pegging paint pallet and the big floor ‘b’, all of which were happily played with for a short time. Adam’s fine motor control is building through he appears to find it frustrating that he can place a pen inside a shape but ends us making only scribble marks over the whole page.
j) 3d felt letters

Next week: Cats and caterpillars and cars will all be crawling across the table!