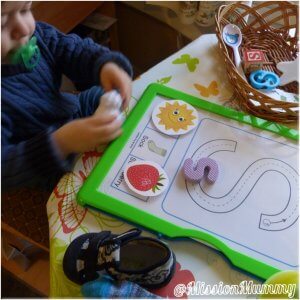 This past week’s tot-school…
…was s s s something.

I found the letter S overwhelming, there were just so many things we could link to. On Monday, I had just finished the weeks paperwork when the computer crashed… stupidly I’d forgotten to hit save. It was a disappointing start but one that would not define the week, no illness would do that for me. As I dosed up the 2 men in my life tot-school became the treat activities to do when the little guy was showing signs of boredom.

While the week was rather unfocused Adam picked the letter up from the get go and was pointing out ‘S’s and guessing objects he’s forgotten the name of with ‘s,s,s’ followed by a random sound. It’s a great place to be as he’s really starting to identify the idea that all words begin with a letter sound.

Mummy loved the sheep but Adam got most excited about the snake craft, referring back to it many many times as well as pointing it out to visitors.

The letter tracing mat was a bit of a flop for the first time in ages, Adam wasn’t interested in working with it in any way other than to match objects, though he did match the big letter to the letters in the basket.

Nope. Linking sounds to letters, phonics, is something I’m been pretty sure Adam’s was aware of before now but this week he’s really confirmed that. Phonics is all I am aiming for on the reading spectrum, I believe decoding (putting letter sounds together to form words) is best left until children reach at least 3 years old, preferably older. 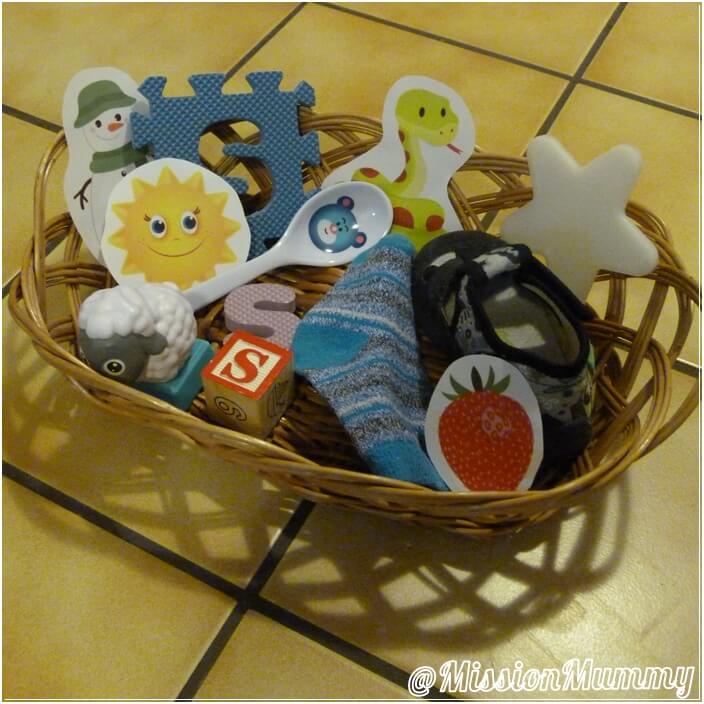 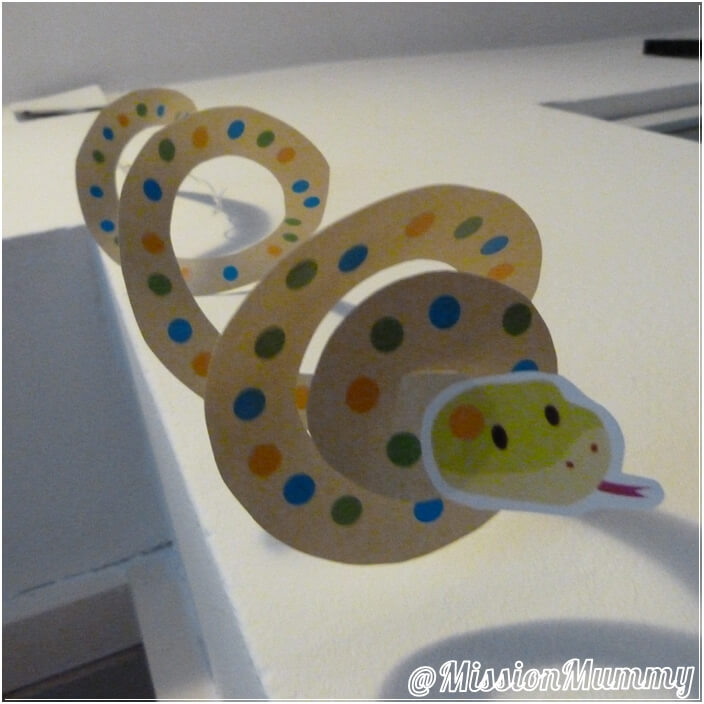 Monday
With the only paperwork a printout of the graphics and one letter tracing mat I popped that in the wipe clean board and prepped the letter basket. Adam really engaged with all the objects and for the first time he took the letters as well as objects to match with the tracing mat. Wanting to do something creative I grabbed some green paper and lots of small dot stickers and made a simple circle snake, adding the head with a dab of glue. Adam did really well with some of the stickers and directed me to place the rest.
1) Letter basket
2) Capital letter tracing mat
3) circle snake

Tuesday
Tuesday started as usual with the letter spinner I’d now remade. These are great for vocabulary building and to have about for future reference later in the week. We then did the picture match page, first with a toy car and then the pens, it was a lovely way to engage in the activity as he wanted. We finished with the jigsaw puzzle – which for some reason really captured his imagination this week and he was very eager to show it off to daddy!
1) Letter Spinner *
2) Picture match *
3) Snake jigsaw * 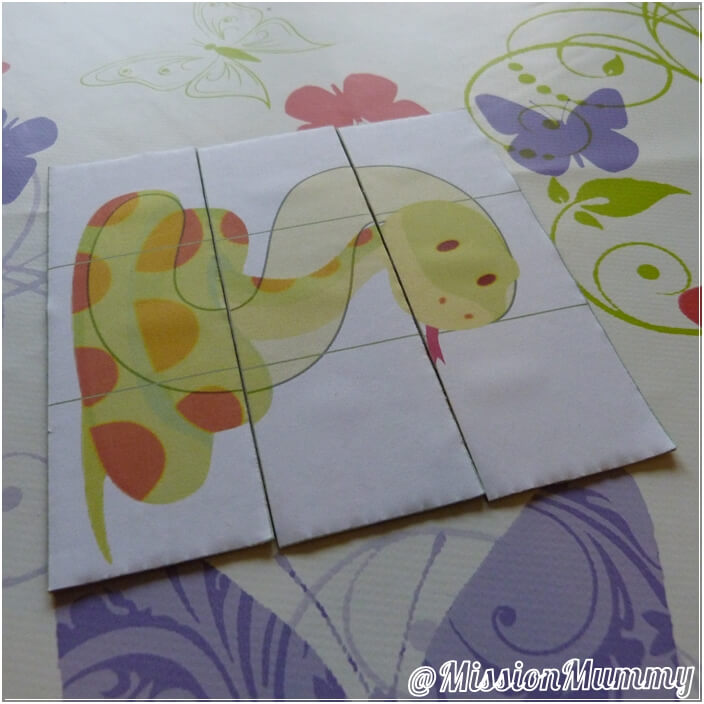 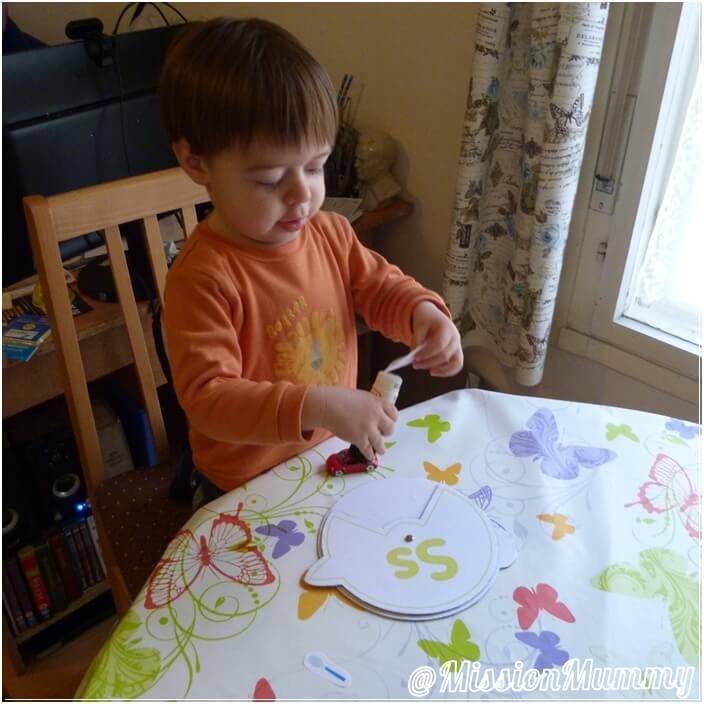 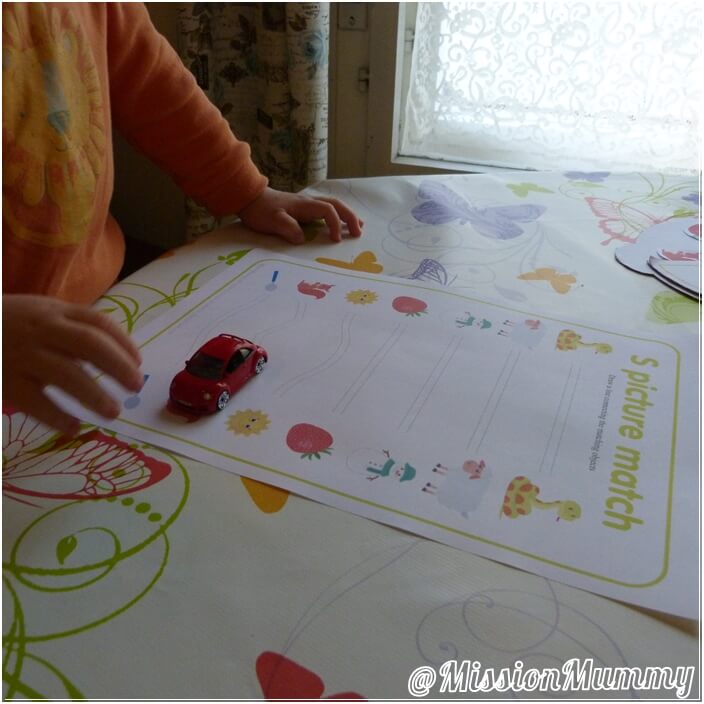 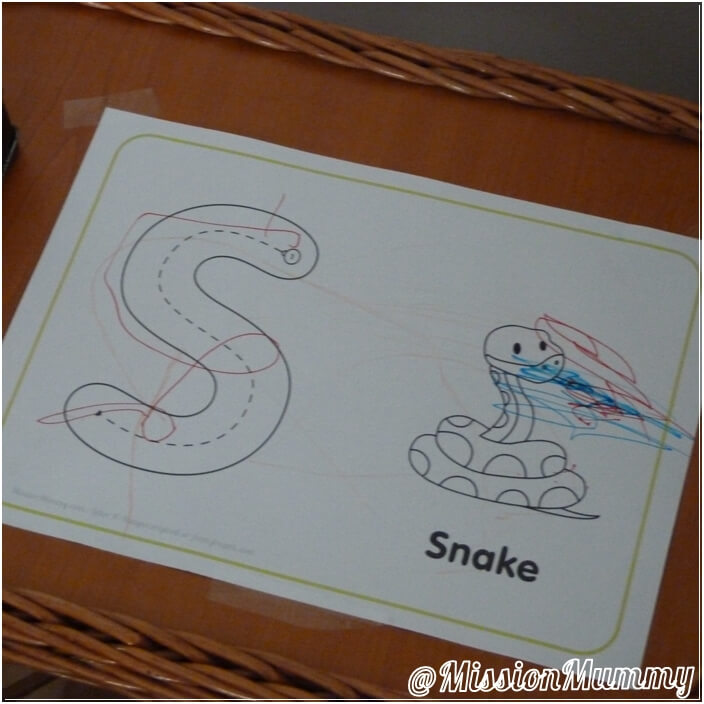 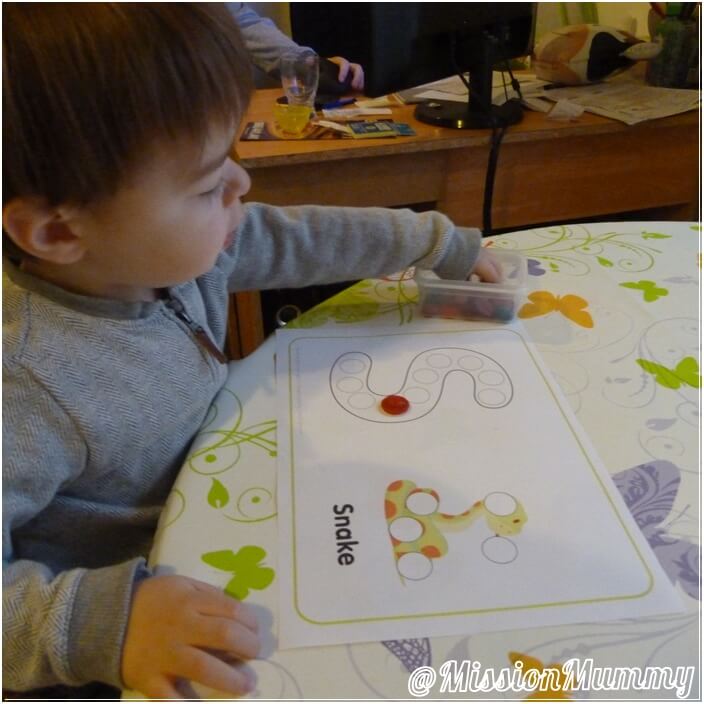 Wednesday
I set out the Uppercase guided letter page on his small table again and he took the bait happily. We also got out the buttons again to use the do a dot snake page, we have a big tray of buttons and so I brought that out and he spent most of the day returning to them examining their shapes, colours, matching and lining them up.
1) Guided uppercase letter page *
2) Do a dot snake page *
3) Button tray

Thursday
With lots of creative ideas printed out this was our day to make something for the wall, we started with a sheep and lots of cotton wool. From there we found some stars to repeat our do a dot page and then constructed a squirrel with a big S for a tail, we used spacers rather than glue so positioning was really important but the result was worth it.
1) Sheep craft *
2) Do a dot snake page *
3) Squirrel craft * 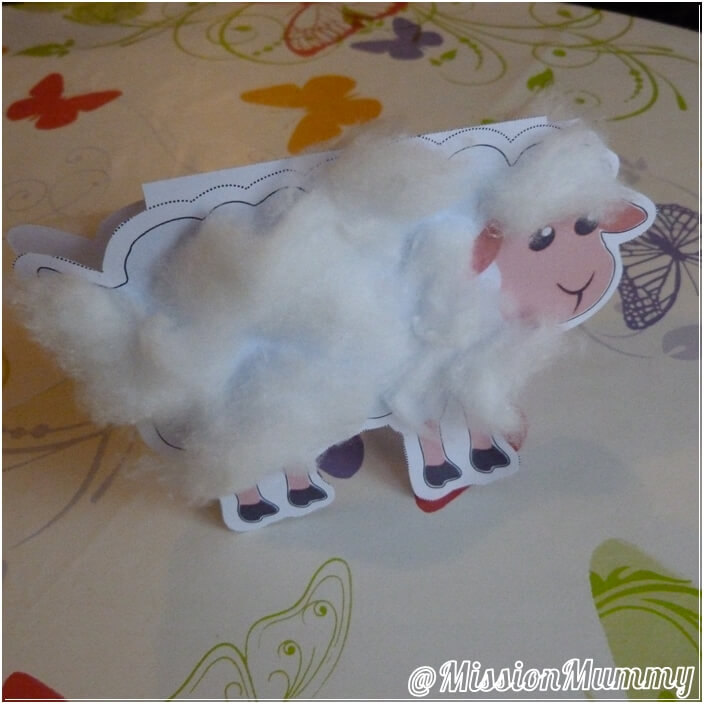 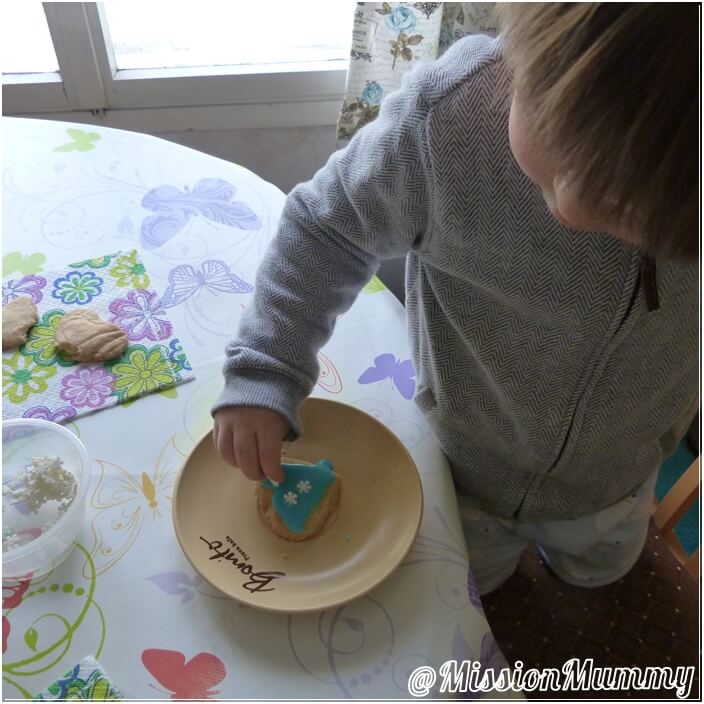 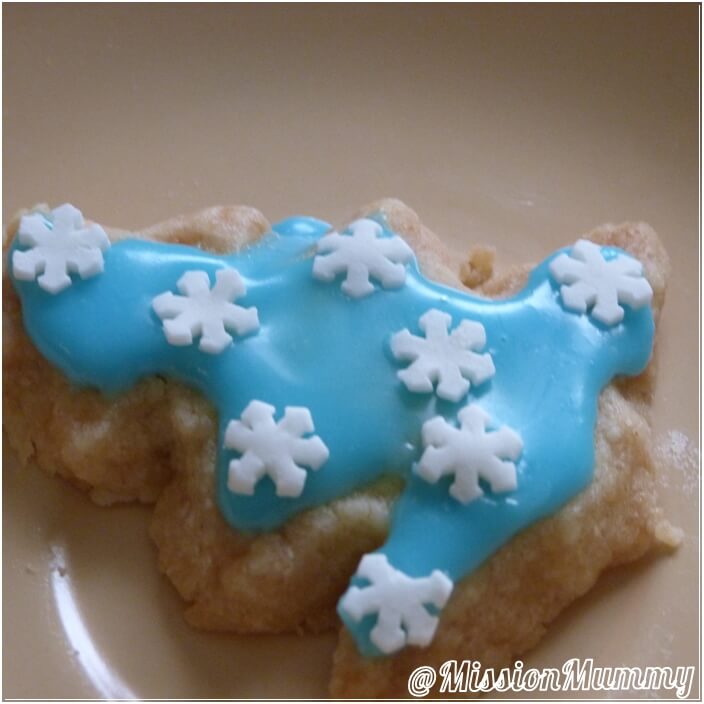 Friday
Having had a full tot-school week I decided to try some cooking to round it off. We make simple cookies and Adam helped empty ingredients, roll dough, cut shapes and decorate with snowflake sprinkles. I used one of my favourite recipes for simple sweet cookies and plain icing sugar with a drop of blue food colouring so the snowflakes would show up. The verdict was that they got eaten far too quickly 🙂
1) Snowflake cookies 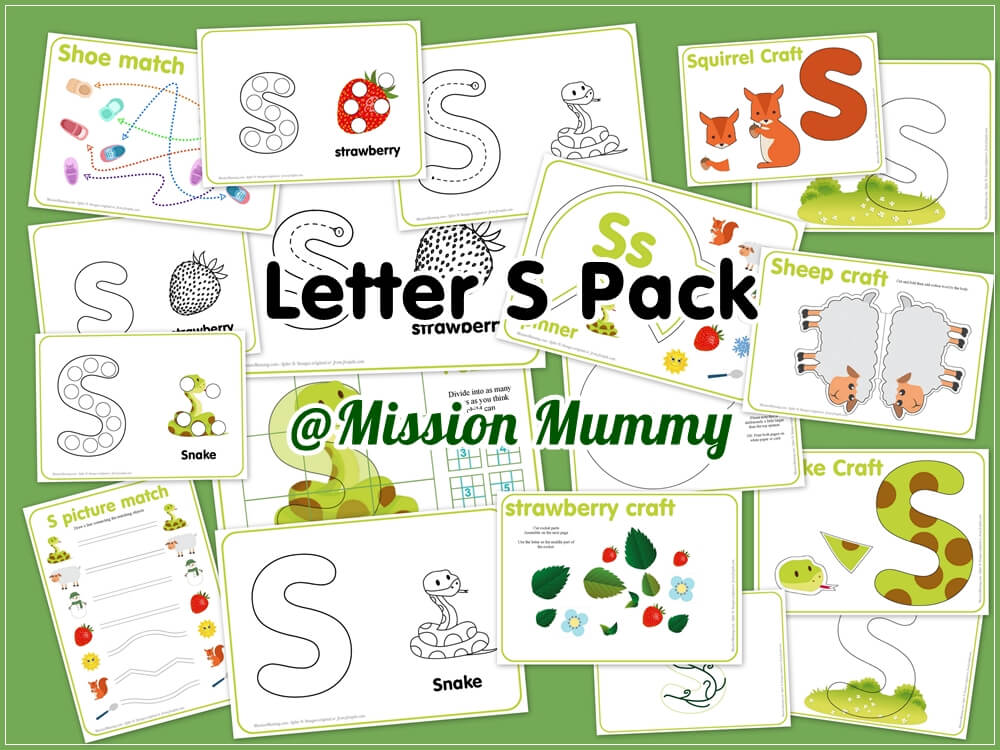