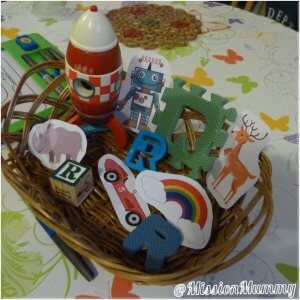 This past week’s tot-school…
…was rather enjoyable.

I’ll admit it, I was looking forward to the letter R appearing, rockets and robots and rainbows are all such beautiful and bold things to work with. I must have mentally checked off 20 odd activities to do and yet when I came to plan I reined in the chaos and forced myself into a simplicity that gave the week a lovely balance. Having a beautiful rainbow to brighten the blustery transition into spring helped too.

With hindsight I’d recognised that Adam only really uses the uppercase resources. When we’ve introduce lowercase he ignores it or gets confused. This week the lowercase bits were the rocket, rather than adapt I decided they could be used next time round. I’ve also recognised that the guided letters in the letter tracing mats focuses his lines really well and so this week I made him a second one for his unsupervised table. He usually begins from the base of the page rather than the number prompts but at this stage that really doesn’t matter to me.

Co-operative crafts. I knew the rainbow craft was far too difficult so we worked together, Adam choosing bits, pushing pieces down and passing them to Mummy. It’s a lovely way to do crafts and while independence is great this teaches co-working skills that he is still mastering.

I think the biggest flop I had was actually before we began when I realised printing all the lowercase stuff would just be a waste of paper.

Nope. We loved R and learning a new word ‘rhino’ and trying to remember the word ‘reindeer’ from Christmas, but existing words really do work best. The word ‘Queen’ hasn’t stuck with him so I’m glad we jumped a week. 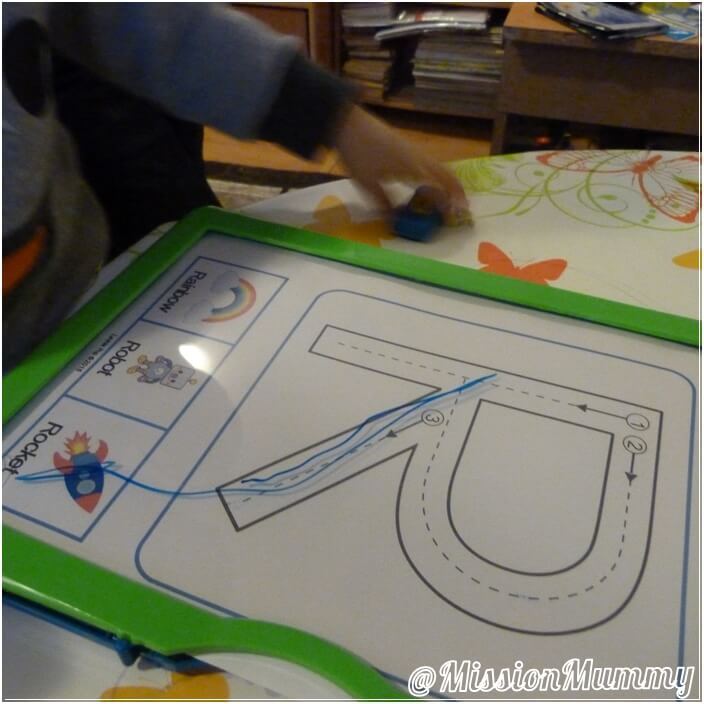 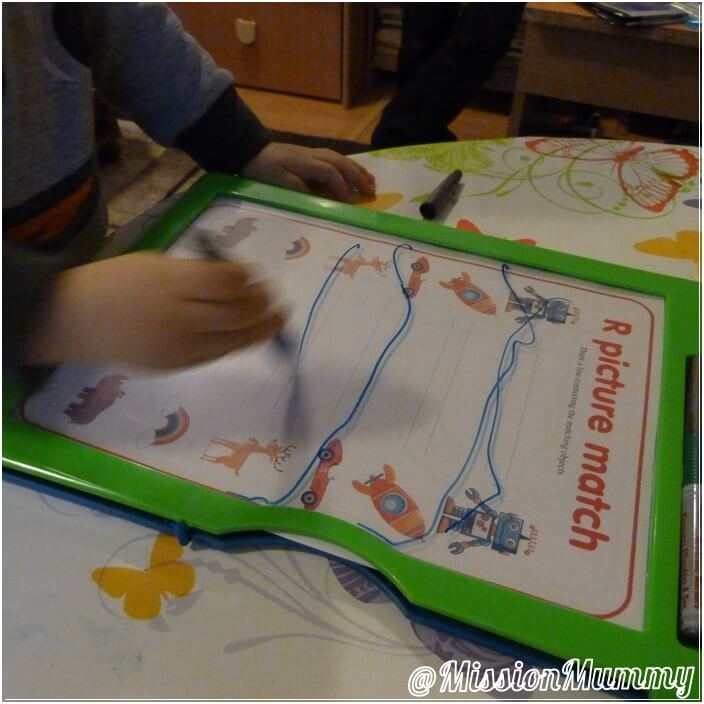 Monday
The standard start of the week with a letter basket and letter tracing mats as per usual. I’d struggled to find objects for the letter basket so ended up printing the graphics a bit larger and cutting them out. Adam again loved to match the things in the basket to the tracing mat. We ended with the picture match page which he loves for the match element, usually ignoring the guide lines!
1) Letter basket
2) Capital letter tracing mat
3) Letter R picture match *

Tuesday
Today was all about placement starting with the jigsaw. I’d printed the jigsaw at 70% and it came out beautifully. After that we used some funky foam topped bottle caps for our caps page – twice. Finally I had cut out the robot craft and Adam was eager to place the various pieces together though we didn’t have any glue to hand, this was a mistake on my part because he was reluctant to repeat the process with glue later.
1) Robot jigsaw *
2) Caps page *
3) Robot craft * 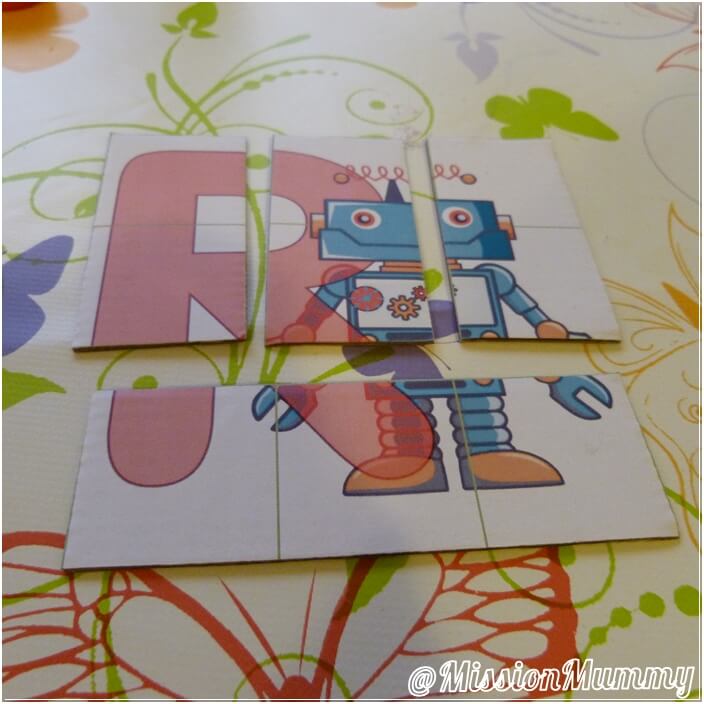 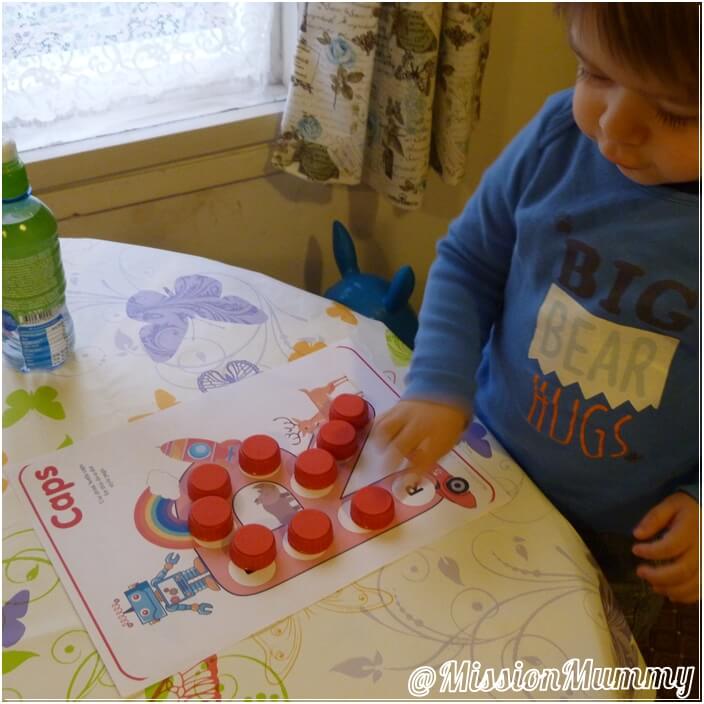 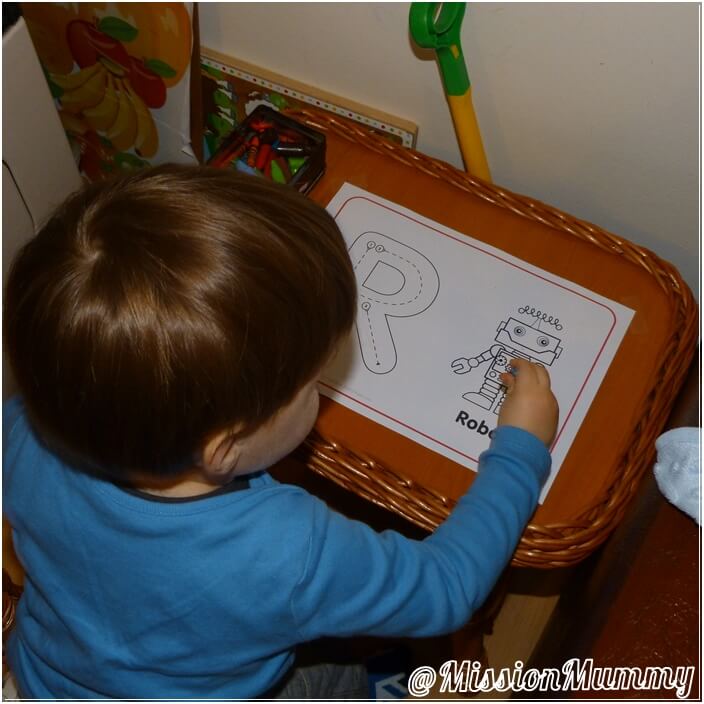 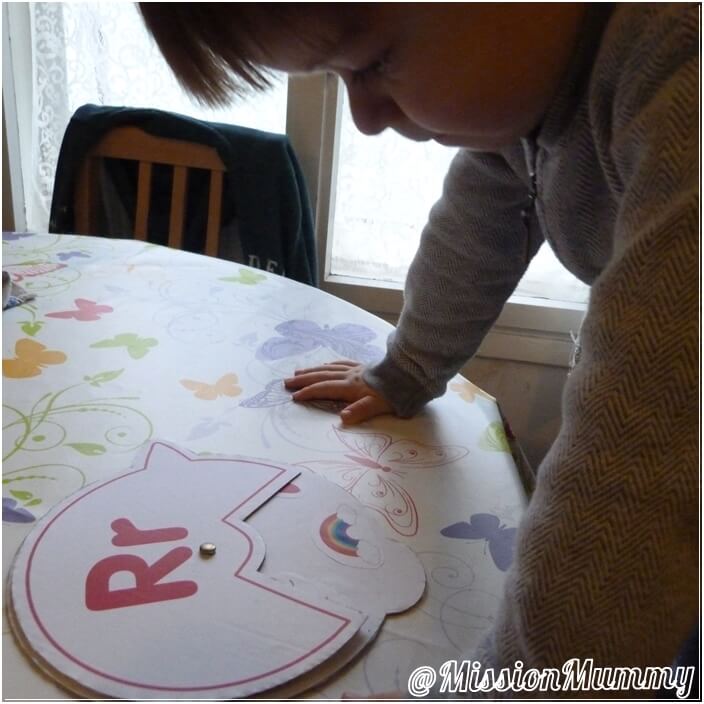 Wednesday
I’d not planned on covering tot-school on Wednesday but I had set our a guided letter on Adam’s small table which he explored briefly then later returned and happily completed. Straight after he climbed up to the big table for more. We repeated the jigsaw and then found the glue to make the letter spinner.
1) Guided uppercase letter page *
2) Robot jigsaw *
3) Letter spinner *

Thursday
Thursday morning I turned on the computer and at the top of my facebook feed was Hattifants new rainbow mobile craft. It seemed just too perfect. This was defiantly a co-operative activity as I clearly did 90%+ but Adam is so proud of his work and spent the next few days pointing to it while listing , “sun and rainbow and raindrops and flowers”.
1) Rainbow mobile 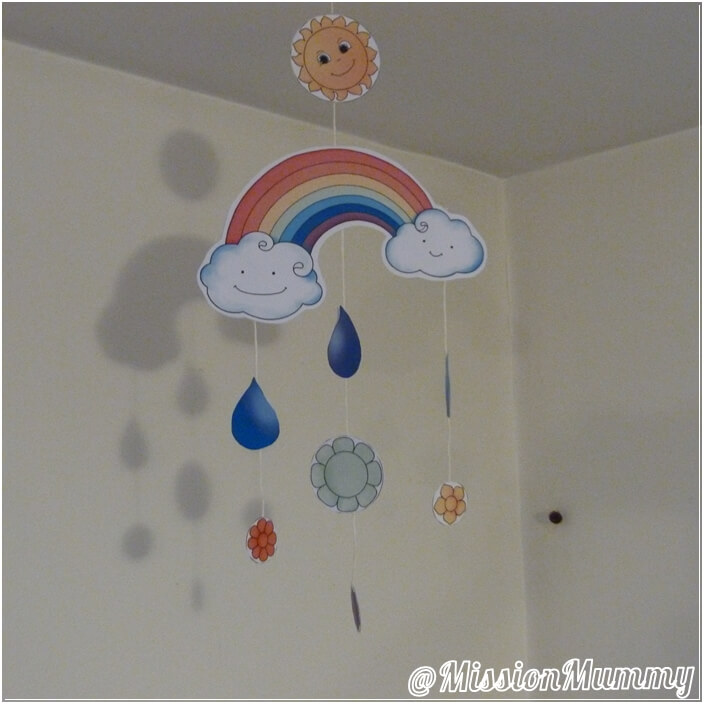 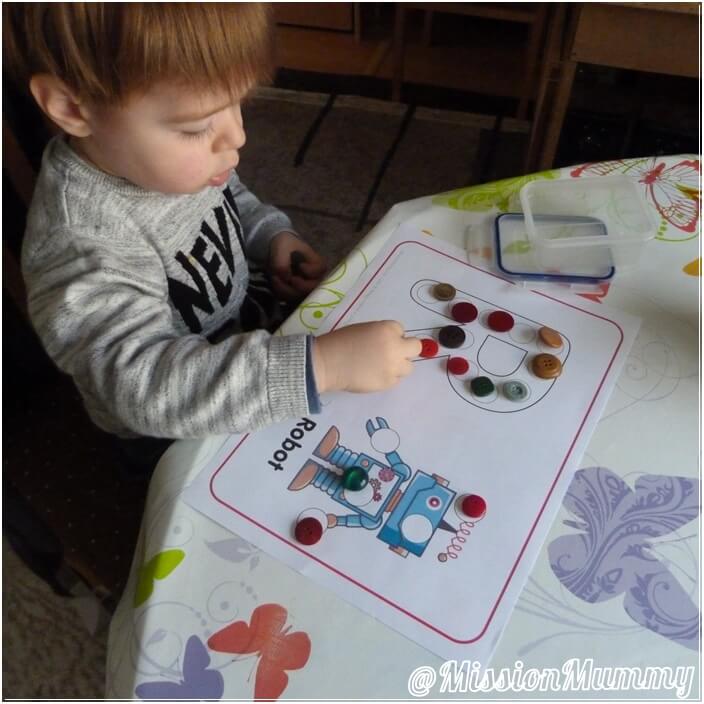 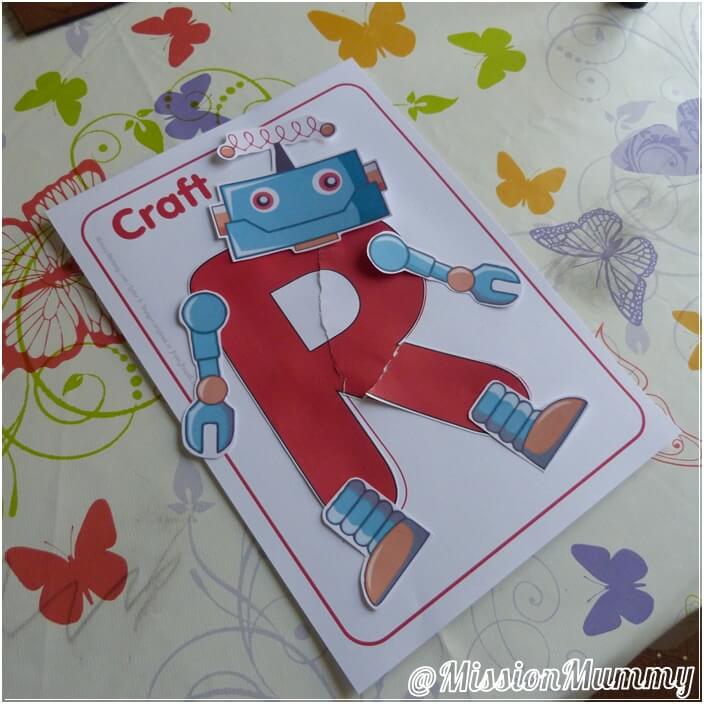 Friday
Friday I’d lay the table with two activities for our nap deprived tot awaiting his signal of interest. I’d put out the do-a-dot page with a container of buttons which peaked his interest after being highlighted and as we’ve not done buttons for some time it was very much enjoyed. Much more halfheartedly we finished the robot with his re-positioning of the already glued letter leaving it torn.
1) Robot and letter dot page *
2) Robot craft * 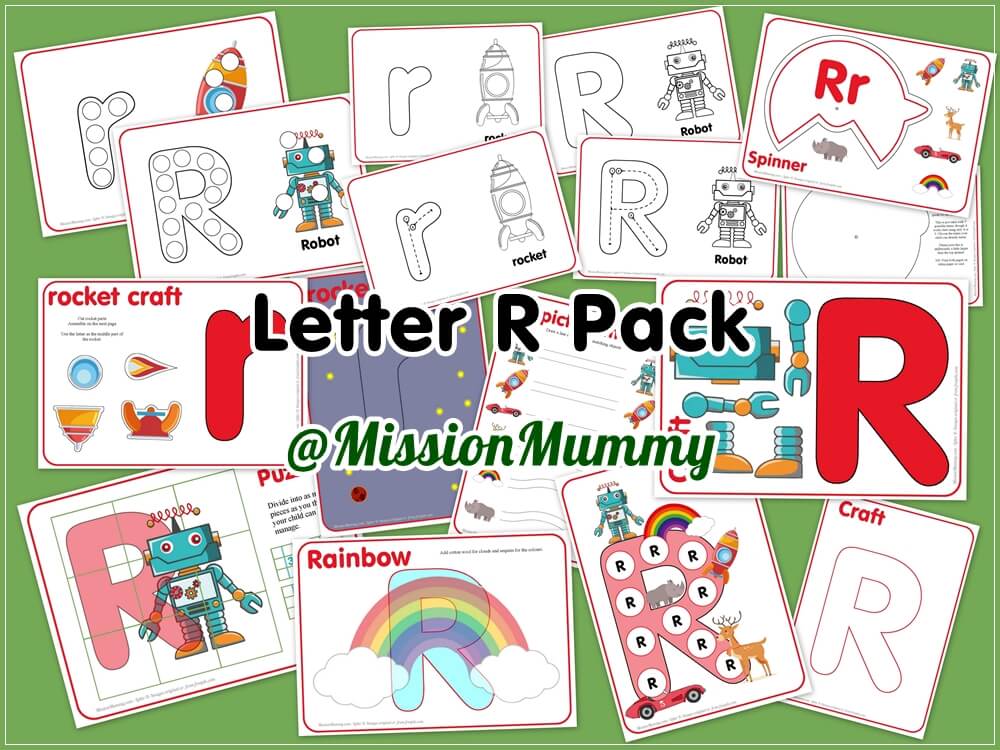