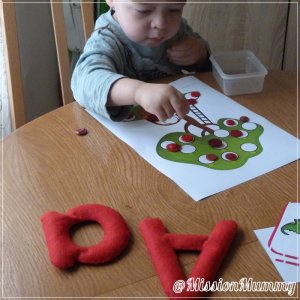 This week we started totschool…
…and we are loving it!

With Adam’s name beginning with the first letter of the Alphabet we just had to start with the letter A, and teamed it up with the classic apple image and red colour.

Overall we really had a great first week with Adam really taking to the table work and engaging for a decent time most days plus requesting more later in the day. White board markers and the ‘colouring’ was the most requested activity while button placement was probably the one that gripped his attention the most. Making the tactile felt letters was probably my favourite alongside the peg letters, both turned out so bright and inviting.

Originally the term meant structured play with a parent introducing simple educational concepts such as shapes, patterns, letters and vocabulary. For us totschool is table work centred on a single letter and accompanying concept each week. The structured play part comes into most of our play anyway.

In many ways yes and yet no. This is an informal introduction of concepts to make them familiar, if he doesn’t take it in that’s just fine by us. We are also limiting new things to just one or two a day so I suspect the activities will become more varied as the weeks go on.

No. The things we use are freely available online. We’ve bought a pack from a totschool resource site, but mostly to support them. There is no schedule or curriculum as such.

2 or 3 times a week we would get out the ‘teach my toddler’ blue box. It was flashcard based and just didn’t suit us very well.. Now summer travels have ended it’s a good time to introduce new routines. (For other mummies reference Adam hits 23 months this week)

Totschool happens at the big table. Sometimes Adam climbs up to see in the mornings but new activities come after his sleep / quiet time. We carry on for as long as he’s interested and often come back to the activities again later in the day at his request. Presently we plan on doing totschool each weekday. 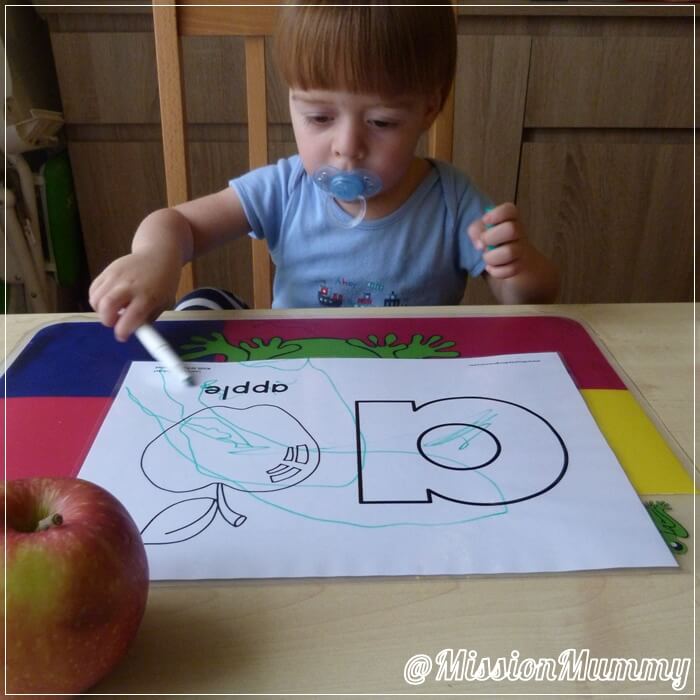 Monday (control skill : white board markers)
Today we kicked off. Adam loved the whiteboard markers and while he identified the objects and letter there was no control to his drawing. We did, however, manage to link one of the the capital and lowercase horizontal lines. We put a real apple on the table to talk about too.
a) Connect apples to form the letter – UC + LC
b) Letter plus image – UC + LC
c) Linking images, horizontal lines.
d) object discussion, apple

Tuesday (control skill : buttons)
Adam was straight for the pens to do ‘colouring’ though he wanted the blank sides of laminate. We found lots of red buttons and tried using the do-a-dot pages to put them on the letter and apple. The buttons were a big hit, especially the one green one for the leaf.
e) General colouring
f) Button placement – – UC + LC plus image
repeat c 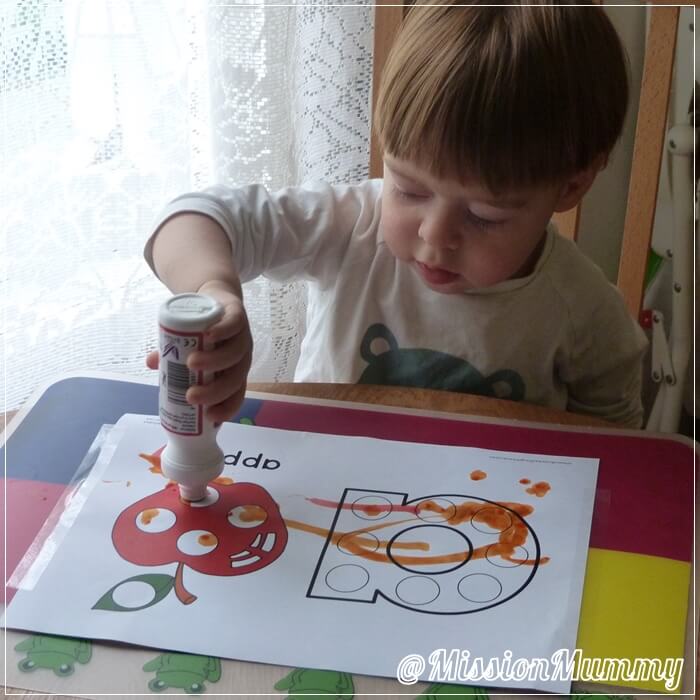 Thursday (control skill : image recognition)
Working from the phonics card there were three pictures made into 2 piece puzzles all with things starting with an ‘a’. After Adam requested the buttons, so we introduced a new image of a tree and counted the button apples as they went on.
k) 2 piece puzzles for the letter a
l) button placement tree image (pictured above)
repeat e, h, i and j. 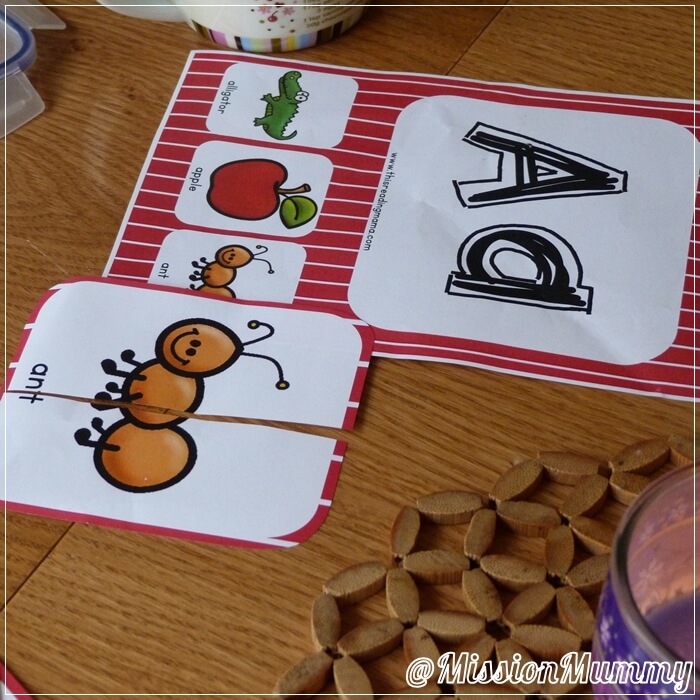 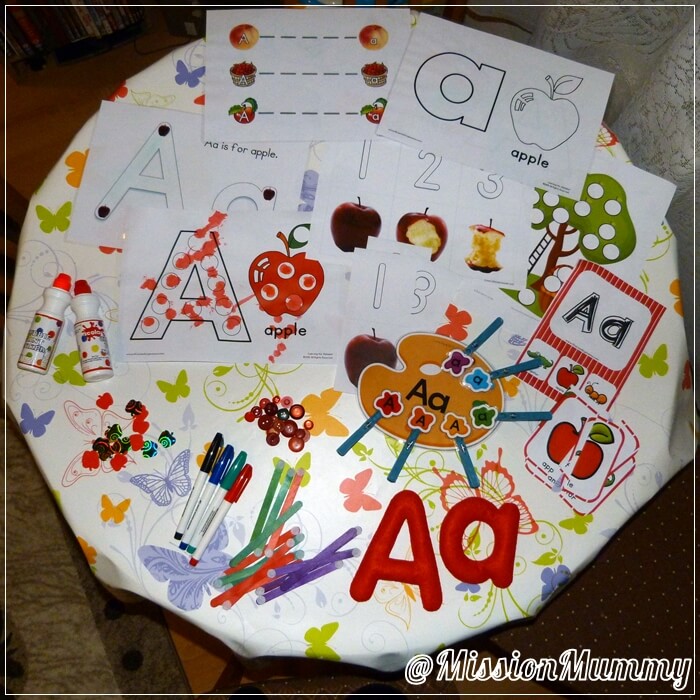 Friday (control skill : sequencing)
Friday everything fell apart. We started too early and the rhythm of the house was out. Today was less about ‘A’ while we worked on the colour red. The new tasks were about sequencing, but Adam confused it with matching, I think it was just a bit ambitious so we abandoned it. We just let him play with whatever materials from the week he requested and he did return to the table briefly later. The camera also broke so no action shots but here are all the materials we used this week.
m) 123, eating an apple
n) Red and green apple shapes
o) Velcro dot sticks

Next week: We’ve decided to follow the alphabet the first time through so we’ll be playing with bouncing balls and blue balloons!