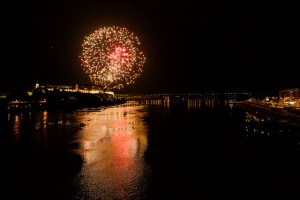 The city is swamped with tourists, oozing out of temporary accommodation into streets thick with the ebb and flow of crowds. Sun fall brings a wall of people trekking across the bridge, along Belgrade road and up to the entrance gates. A few rows behind me I hear a shard of conversation, a girls lament on how locals get tickets half price. I cringe inside, both from the arrogance of knowledge and the ignorance of circumstance. A Facebook image hovers mind about how it used to be that people from Novi Sad could afford to attend the festival.

One of the hardest things to explain to foreigners is how Serbia is still developing. One one side of the coin there is a Microsoft branch that’s contributed to things they may use everyday like Word, Microsoft Cloud and Windows Phone applications. The young are very educated, they may watch the same TV shows, listen to the same music, perhaps even buy some clothes from the same multinational brands. But looking at the other side of the coin is very different, on this side “According to statistics, about 140,000 live in destitution, and every second citizen under the age of 25 is unemployed” While the majority are some place in the middle the average wage in Serbia is 6 times smaller than the uk. It’s usual to see people trawl bins for plastic bottles and metal cans, horses pull wagons heavily loaded with old cardboard, second hand clothes are bartered for, traded, sold, worn and re-enter the market system again.

For every advocate praising there is another painting a dire scene, both are unhelpful even if true.

And so back to the festival, to the crowds slowly shoving forward, the blows of whistles through the tunnels, the sequel of a first timer, the blatant advertising, the roar of the stages and the flashing of multiple camera phones. Back to the face of the girl I fleetingly saw, too far away to respond to. What would I have said to her, how could I convey that half the price is still a weeks salary, tell her that the festival is our cities only real cash cow, explain how the festival itself makes it hard for local business to fully profit, how those prepaid cards for double price drinks hurt locals much more than her. How could I convey that the price of tickets is just dust in the wind to the history of the ground she stands on, to the people who pass these cobbles on other weekends. I couldn’t.

Rather I’ll pray that she has a wonderful experience, pray that she gets infected with the atmosphere, touched by the city and comes back. I pray that now she knows the way she may come back when the fortress is not a festival ground. I’ll pray that she invites friends, tells them about the breathtaking fireworks that literally filled the sky with a ball of flame, about the relaxed people and chilled atmosphere, how the fortress provides amazing acoustics, how chill out zones and interactive areas let strangers engage, that she spreads a positive image about a country that’s not seen so positively by many. I pray that one day this will not be a country of extremes and that it learns to really use it’s yearly platform to establish a better tourist industry, because it’s a beautiful land and it really has so much to offer.

Official Festival Photo : Image source : https://www.flickr.com/photos/exitfestival/19417632099/ and it was totally amazing to be standing under!