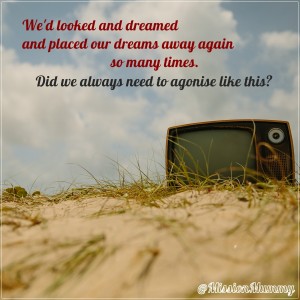 but we didn’t need it

but people think we are strange for not having one

but we have other things we use instead

but alternatives do have their limitations

but our bank account is, in part at least, filled by donations

but it would be nice…

and it’s not extravagant

That’s the conversation that circled my head for months, ney years. It’s a conversation that I’m sure many whose lives are funded, even in part, by generosity rather than companies have had millions of times. It’s the uncertainty between funding items you need and items you want. It’s why church leaders with expensive cars set alarm bells off in our heads, it’s the thin line between provide and squander.

We’d looked and dreamed and placed our dreams away again so many times.

Did we always need to agonise like this? Where is the line drawn, how do you mark the sand and feel confident the wind will not shift it into unacceptability? How do you separate the reward for your work, your tent-making and you mission? How do you deem something an ordinary need rather than an unnecessary splurge?

For us the conversation rotated round one item, an object that you will find in almost any house you enter, a television. When we first married we lived in a borrowed flat with a TV, since moving out, approaching 4 years ago, we’ve made do with tv through Zeljko’s computer, using catch-up and streaming services. Apart from the news and international sports events, it almost became a boast that there wasn’t one in our house. Time was not squandered channel hopping and wasted hours carved of advert breaks were not part of our lives. Then Adam ended up watching his beloved ‘Bing Bunny’ on my little tablet because Zeljko was working, and touch screens and toddlers…need I say more. So, with a wall bracket at shoulder level the new tv sits on the wall. The voice that told me it wasn’t extravagant won.

As mission turns from temporary into permanent your needs evolve, it’s a natural but challenging experience. Many people on mission live knowing there is an end date in sight, it flavours their friendships, peppers their conversations and fuels their drive forwards.

Living in a state of temporary is unhealthy for so many reasons, and yet we passivly, if not actively, encourage our oversees volunteers to do just that.

While having an end date can be useful it can also be really harmful, especially when it comes to building a home. We berate missionaries who indulge luxuries, pennies must be accounted for and generous blessings eked out as far as possible. For short-term-ers this is logical, why would they invest in objects they can’t bring back, why can’t they do without and bask in the luxury of homes normality when they return. But long-term-ers know the return is so far away, if it’s ever coming. They need the ordinary ‘luxuries’ to build their present ‘home reality’, just as much anyone else needs theirs. Shouldn’t keeping them in check, at a relevant level for the community you are in, and generally being frugal be all that’s should be demanded?