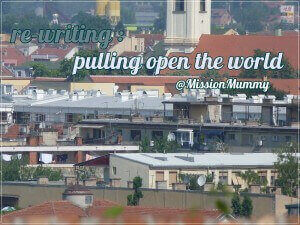 Anyone who writes for a website that ‘posts’ regularly will testify to the amount of time it can eat. With each post taking over an hour to write, many trebling or quadrupling that time. For a new mummy that means a lot of snooze breaks.

I’ve been blogging for over a decade now and I’ve probably got just as many rejected and re-written posts as I’ve graced the digital airwaves with. While feeling like a sort of digital journal, blogging is much more like a letter you intend to publish in a book. It’s both cathartic and potentially chaotic. I learnt the hard way that pushing the publish button prematurely can give you a lot of trouble. I’ve left a ragged digital footprint, haunting, naive, deeply poetic and too often cringe worthy to boot.

Then it occurred to me, I did have that time to ponder once and perhaps the wisdom I discovered then can be rediscovered now. I’ve spent a little bit of my free time looking back on those old posts lately, it’s been a joy in the most part, and rather than re-invent the wheel I thought I’d repost some of my favourite musings. Today’s offering isn’t so old, from just 2011, and it’s entitled :

We live in a falling apart world, held together by sticky tape and paper clips. Our components are failing, layered with dirt and infection. Some of us fight with tiny rags, others rub oil onto fractions of worn joins, some of us push the dirt down the holes and lay a button on-top and pretend it’s pretty.