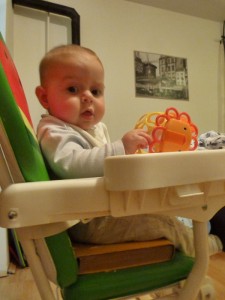 There is a rush in life to be on to the next stage, and this is no more acute than during childhood. Parenting sites bombard new mothers with life stages and goals, it can often seem like your child is miles ahead or lagging sorely behind.

One of the great lessons I’ve been reminded of recently is that sometimes we just need a little push to get to the finish line. Adam developed so much in the time we spent in England because he was pushed into a new environment. With his six month dawning I wanted to move him onto the high chair, but we had a problem, and that comes in the form of being short. His little arms kept getting stuck below the tray and we needed a little push up. Hence an old book was placed beneath his bum-bum, bonus – the old cover actually ended up having more grip than the plastic seat.

Adam has always been a strong baby and he’s been sitting up semi-supported for a LONG time. This week he’s starting to manage more and more time sitting without nosediving, enough to sit unsupported for short bursts. I think a big contributor to this has been getting him in a high chair more often. So we say goodbye to the book, he’s more stable and he’s grown a little, it’s no longer a needed.

As I slid it back onto the bookshelf I felt a sort of sadness, for battered and old as it was it marked both a beginning and an end. It made me stop and wonder how much we’ve placed back onto the bookshelves and forgotten over the years, what nudges, catalysts, and shoves we’ve shrugged off in the rush to get onto the ‘next stage’.