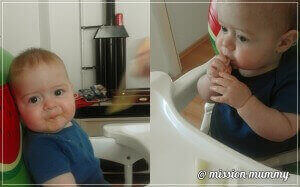 A few months back I met up with my two mummies in the city, we stopped for a drink and to feed our three little boys. I remember clearly then watching the two mummies with their bite sized and finger mashed food as I bottle fed Adam who is the youngest of the trio. Weaning was already on my mind and while their meal wasn’t by any means a disaster it did seem a lot of work.

Weaning is an emotive subject. I’ve never seen such high strung message boards and outright anger displayed as I have when people discuss when to start. Medical professionals appear equally torn, some insisting on the 6 month mark, others (like our Serbian doctor), insisting during the 4th month is the right time. And when you decide to take the plunge there is more debate on what to feed the little one, how much and when. I’ll happily admit I found the whole thing quite daunting. 7 weeks in and I’m relieved to say it’s wasn’t nearly as traumatic as anticipated.

Like everything connecting to feeding a child there is much debate and little instruction. Nobody wants to be definitive as children are so different. ‘As long as the child is healthy, happy and gaining weight’ is the mantra that spurts forth, but it’s a unreassuringly subjective line to many, especially those who don’t get to weigh in very often. So that five month old who is chomping MacDonald’s chips can be sitting next to a child who will get only milk for another month and both really are doing just fine.

Like most we muddle through. I sided with the late start people using spoons, admitted our diet is not veggie heavy so jars would be in the picture and got used to sharing my food with Adam when possible. I must admit preparing refills for the jars has had mixed results, I still fret over if he’s had enough, but he eats well and finger foods are still a game he enjoys. Jars, like formula milk, disposable nappies, spoon led weaning, and so many other things fall short of the co-sleeping, constant baby wearing, potty trained at 2 months parents, but who cares. I’d rather grab a jar of (what legally has to be nutritionally balanced) purée, order a pizza, and spend the afternoon laying on the bed hearing Adam say ‘glug glug’ in glee and giggling until my eyes leak!