Delaying nursery for the bilingual childSeptember 3, 2018 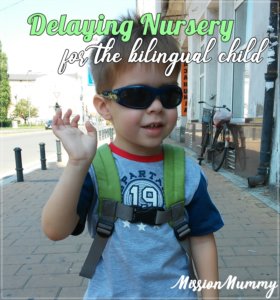 His little backpack was clasped across his chest, and he walked down the road a miniature version of his backpacked father – they were off to nursery.

Adam’s first birthday party was dominated by talk of nursery. Nursery here encompasses preschool and lasts until 7. Many of his peers had already secured a spot and various tales of how the system worked, or could be convinced to, continued to flow our way. We watched those who loved it thrive while others took longer and longer breaks as alternative options were called in. Nursery is a hot topic for many parents. There are those parents who have no choice, they must work. Others see early childcare as a necessity for many reasons ranging from socialisation to parental sanity. We have spent much of the last 2 and a half years defending our decision not to join in.

The biggest argument people had was that Adam showed little sign of picking up the local language. Part of this is his cautious personality, but he also spent 99% of his time in environments where he could use English. We wanted English to be his first language. This totally baffled some. Most argued that we should use the ‘OPOL’ (one parent one language) approach from birth. People were downright rude and laid their judgement thick, often adding second hand knowledge of situations where young kids have thrived. Instead we opted for the ‘MLAH’ (minority language at home) approach and from all the research and reading I’ve done it seems to be the one the experts favour. The same experts who readily admit that transition into nursery or school is the approaches biggest weakness.

I may be branded selfish but it’s been lovely to share the early years as a family where everyone is fully understood by each other.

Adam’s English is great, he’s a born storyteller and that solid foundation will benefit him. It’s widely known and accepted that the majority of children who start school without much knowledge of the community language, are able to become proficient within a short period. We are pretty confident that Adam will follow this path, he’s a bright kid and eager to learn when he feels secure. In most cases, the community language takes over becoming the more fluent one. So much so that the downfalls of the OPOL way is that the minority language can (sometimes) get pushed aside or develop much slower, kids need a huge number of hours in each language for them to develop at the same rate.

As well as the language reasons we were blessed with other factors.

We didn’t need to send him.
We both work from home with jobs that allow for a great deal of flexibility in hours. As well as meaning we didn’t have to gamble with building his immune system or infant separation fallout it also meant that our chance of securing a state place was remote at best. Even now his new nursery is private.

It was better for him
Adam is a cautious child, he didn’t want to try new experiences and often would cry uncontrollably if pushed. Waiting until he understood what was happening helped. While people cried ‘socialisation’ and ‘independence’ I knew research has shown that daycare and nursery are generally ‘less good’ for under-threes, with child minders, nannies and close relatives all falling behind parents (though getting progressively better). Remember, nursery was always an option for us not a necessity.

We got to see him grow up
I worked in nurseries as a temp for about a year and I witnessed many a moment that the parents would have loved to see. I understood the privilege of those moments and the tears that some mummy’s could be seen to be holding in as they walked from the rooms each morning. I like to believe most of those parents were trapped in a system of necessity and the best we could do was ease the path for them rather than pile on the guilt. It coloured my thinking and made me realise and cherish the privilege of spending the early years with my son.

And so we waited and when all the signs started to point towards him needing more exposure to Serbian, more time with other kids, and more gross motor activities than our energy could muster we went searching for a nursery that would suit his personality. We found one, a full one, but we knew it was right so we stopped looking and started praying for a place. God provided and Adam spent a week staying 1-2 hours a day before trying out a whole morning. We decided only to send him to the morning sessions and he’s settling well though they fully expect him to be ‘settling’ for a month. (see – it’s a great nursery!)

It’s a decision I’m sure people will continue to question us on for some time but I don’t regret it. If he had been more outgoing and adventurous perhaps it would have been different. He’s ready, even if his stream of tears as Daddy waves goodbye betray his adjustment woes. Afternoons he’ll be home and telling us stories, sometimes doing preschool with Mummy, riding down the street with the neighbourhood kids or one of the so many things that make our wonderful ordinary life.